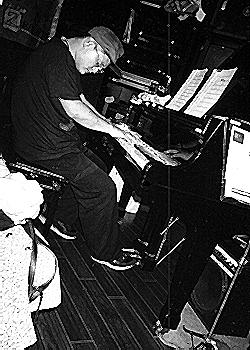 Pianist Takashi Kudo has studied with Katsuya Tamura, Joanne Brackeen, Hal Crook, Edward Bedner and William Davies. He has recorded several CDs and has played with Christopher Hollyday, Katarzyna Sokalla, Dave Barraza, Phil Grenadier and Chris Luard (with his jazz trio and sextet Satin Coast), Tetsuro Kawashima (ts,ss), Jo Yamada (as), Hiroshi Murata (tp), Eiji Nakamura (b), Shinpei Inoue (fl), Makoto Rikitake (ds), Masahiko Osaka (ds), Mitsuaki Furuno (b), Norio Kimura (ds) . Takashi was bestowed the Best All Around Keyboardist Award in 1996 and the Piano Department Chairman’s Award in 1994 at the Berklee College of Music, as well as the Outstanding Musicianship Award in 1990 and the Uchida Scholarship Award in 1990 in Japan.

Takashi won first prize as a member of T-Cubic Trio in the Kyushu Amateur Jazz Contest in 1988. He has performed in the Kyushu Contemporary Music Festival 1990 in Japan and was a private piano instructor from 1987 to 1991, also in Japan.

Takashi currently lives in Kyushu, Japan where he maintains a busy schedule performing and touring both as the leader of his own piano trio and as a much in demand sideman. Red… Black… marks his first recording as a leader featuring the legendary bassist Larry Grenadier and who seems to be the house drummer for the Hao Records label, Scott Goulding. Red… Black… was recorded at Sear Sound in NYC by legend in his own right, engineer James Farber.